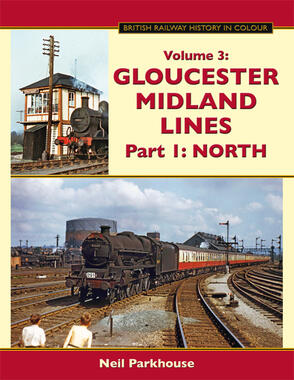 In 1845, the Midland Railway, formed only a year earlier, outflanked and outbid the Great Western Railway for the purchase of the Birmingham & Gloucester and Bristol & Gloucester railways, who themselves had just agreed to amalgamate as the Birmingham & Bristol Railway. As a result, the railway map of Gloucestershire was to have a Midland red spine, with an important and busy main line running through the county from Ashchurch in the north to Yate in the south and with numerous branches breaking off from it. It also served to turn Gloucester in to one of the countryâs great railway centres of the steam age, where the Midland had a separate station, goods yards, dock system and locomotive shed. Having originally intended to cover all of these lines in one volume, the sheer variety, quality and number of images collected has dictated that this major study in colour of the Midland lines in Gloucestershire has had to be split in two. Part 1 begins therefore in the north at Defford, just over the county boundary in Worcestershire, from where we head south to the magnificent architectural gem that was Ashchurch station. Here, we alight to travel the two branches heading off east and west: eastwards, to the Midland station at Evesham, was part of a double-track line that formed a secondary route to Birmingham, via Redditch and Barnt Green, but which was in its final years in the pictures that show it here; meanwhile, that to the west had originally run to Malvern but had been cut back to terminate at Upton-on-Severn in 1952. Back on the main line, the journey then is south through Cleeve, Cheltenham Lansdown and Churchdown, to reach the Midland station at Gloucester, renamed Eastgate by British Railways in 1951. There is a visit to the locomotive sheds at Barnwood on the way and coverage of the Midland goods yard at Gloucester. In the third volume of this remarkable colour series, author Neil Parkhouse presents another exciting and extensive collection of pictures, which are again further illuminated with maps, tickets, WTT extracts and other ephemera of the period. Those who knew the lines featured will delight in how they have been brought back to life within these pages, as so very little of what is depicted remains today. Barnwood shed closed in 1964 and Eastgate in 1975; both sites have since been redeveloped, with that of Eastgate completely lost beneath a superstore. So sit back and enjoy the hustle and bustle of this once busy station, or the variety of workings passing through Hatherley and Churchdown, or wait for the very occasional branch trains at Ripple and Beckford. And delight in the colour of it all! 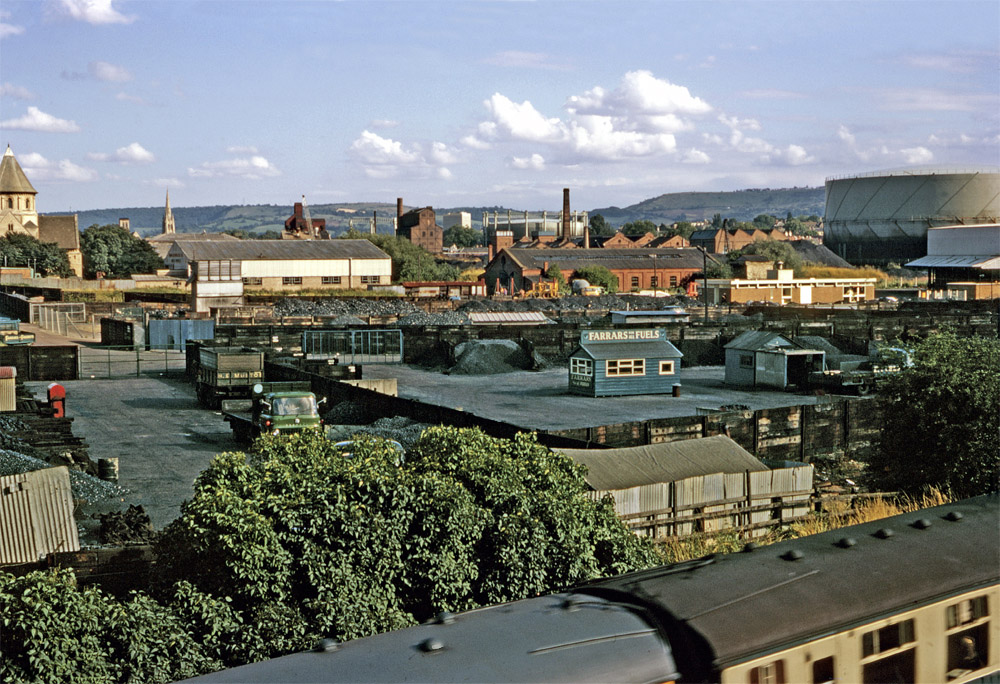 Cheltenham. An unusual and hugely interesting view, looking south east from Tewkesbury Road Bridge, over the main line of the railway in the foreground and showing the coal depot beyond, in October 1969. The offices and yard of Farrars Fuels are prominent on the right, painted blue and with matching lorries in evidence. This long established company began trading in the Stroud area in the first half of the 19th century and by the 1920s also had premises in Gloucester, Cirencester and Cheltenham. On the left is the yard of H.E. Mustoe, who painted their lorries green. On the far side of Farrars' yard, is Thrutchley & Co. Ltd's coal distribution depot, opened in August 1967. This whole site today has been redeveloped with a range of large retail and business units. The red brick building in the centre right distance is the old Midland & South Western Junction Railway (M&SWJR) engine shed and beyond it can be seen the part demolished gas works. The large holder on the right is the one that features in the bottom picture on page 163. On the left of the picture, St. Peter's Church is partly in view. Founded in 1849, it closed as a church circa 2008 but the building is Grade II listed and is now in use as a religious youth centre. 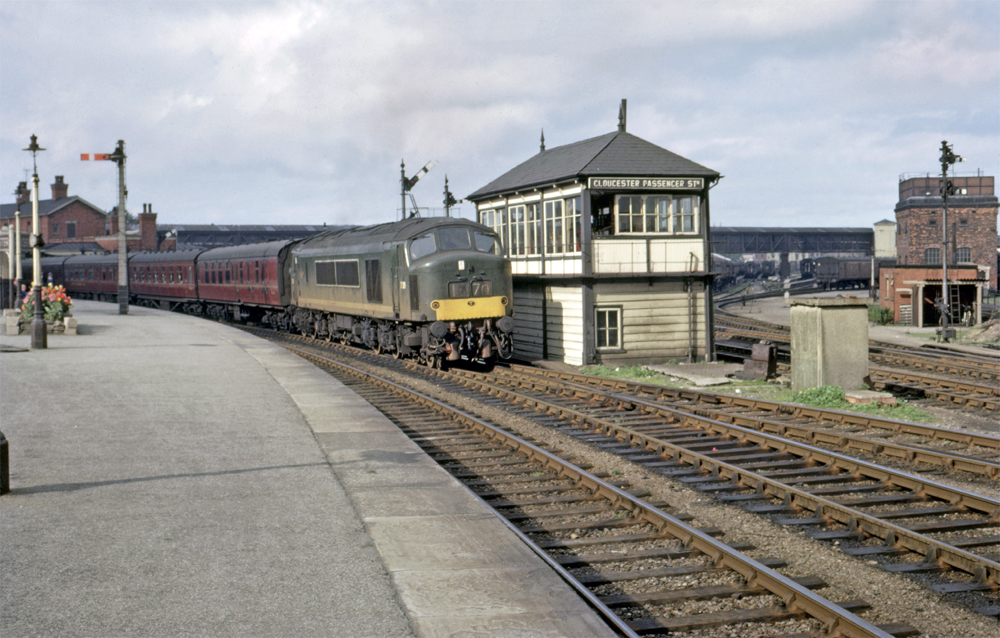 Peak' No. D39 at Eastgate in June 1963, with what is likely to be, despite the missing digit, train No. 1N70 again. New in July 1961, the Type '4' was a Bristol Bath Road engine at this date but belonged to the Nottingham Division by the time of its reclassification and renumbering in January 1975, to Class '45' No. 45033. Withdrawn in February 1988, it was not broken up until 1992. Rather than the full two-tone green livery applied to some diesel classes, the 'Peak's were painted all over dark green apart from a pale green band low down on the body sides, as clearly displayed here, beneath the layer of dirt, by No. D39.