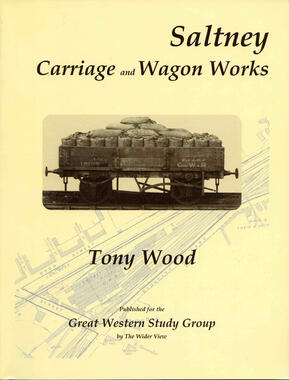 NOTE: This volume is not published by BDL but by the Great Western Study Group.
This scholarly work is a definitive history of the GWR's Carriage and Wagon Works at Saltney near Chester. The author's diligent research has unearthed extensive information about the development of the Works, its place in the local community, and biographical details of personnel that worked there. With the documentary evidence that he presents it makes this publication an important part of the GWR's history. The early history of the works is documented from its inception in 1847 under the Chester and Shrewsbury Railway through the expansion of the GWR. The works at Saltney, along with that at Worcester, provided a carriage and wagon manufacturing capability for the GWR before the establishment of those facilities at Swindon. It eventually closed in 1932 but the buildings saw use during World War II, but alas, not in railway use. There follows a description of the carriage and wagon diagrams built at the works and illustrated with line drawings and photographs, many from the collection of David Hyde. There then follows a very well researched section relating to the senior staff at Saltney, including a comprehensive genealogy of many of them and easy to follow descendant charts. These will be invaluable to anyone researching the family history of these characters. Two of them deserve mention here: Joseph Armstrong who was later to become superintendent of the northern division at Wolverhampton, and then later the GWR's Locomotive Superintendent at Swindon; and James Holden who later achieved notoriety as Locomotive Superintendent of the Great Eastern Railway. There are 20 pages of appendices which list the goods and passenger rolling stock that was constructed at Saltney. These include the lot numbers and the dimensions of the vehicles built, and will prove to be a valuable reference for researchers. This is an excellent book that will prove of interest to all followers of the GWR, but in particular to those with an interest in goods and passenger rolling stock, and to anyone with an interest in the area of Saltney, especially those whose relatives worked in the works.