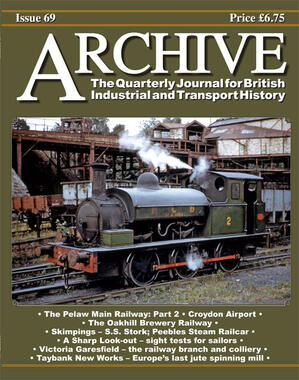 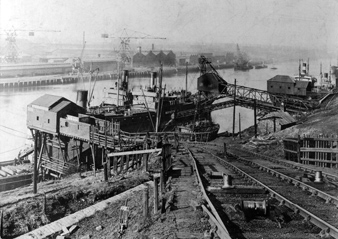 From 'The Pelaw Main Railway' : This also shows the staiths â not those served by individual self-acting inclines seen on the pictures in part 1, but later staiths with a new incline, in use by about 1930, when this picture is believed to date from. In 1940 the Heworth Coal Co. Ltdâs staith was destroyed in a fire, and thereafter Heworth coal was shipped here as well. Three ships are at the staiths or waiting off, but of these only one of the pair waiting to load can be positively identified. The name in large letters on her side identifies Royston as being part of the fleet of Witherington & Everett: their black funnel with vertical white panels was unique. John W. Witherington and Harry P. Everett began ship owning in Newcastle during 1899 by buying two old steamers which they employed largely in the coal trade out of the Tyne. Royston was part of a major expansion of the fleet in the years after the First World War: the 2,722 gross tons steamer was completed by Smithâs Dock Co. Ltd, Middlesbrough in January 1924. Alongside appears to be one of her three sisters also built by Smithâs Dock: Chevychase of 1926, Granta of 1927 or Quickstep of 1928. All four members of the class were unfortunate enough to become war losses, mined or sunk by air attack between 1940 and 1942. Royston herself was damaged in an attack by the Luftwaffe off the River Humber on 4th May 1941 whilst on a voyage from Hartlepool to London with 4,300 tons of coal. She was taken in tow, but sank the following day, although fortunately her crew of 22 and six gunners all survived the attack. Witherington & Everett used various titles for their ship owning activities, Royston being registered in the name of the Granta Steam Ship Co. Ltd. They invested in smaller, mainly German-built motor ships after the Second World War, but with the decline in coal movements and the general malaise of the coasting trade they sold their last ship in 1970. A total of 43 ships had been owned by the various companies they managed. Beamish, 23515 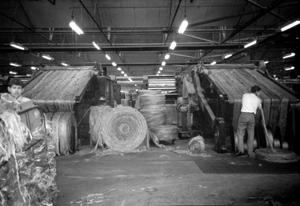 From: 'Taybank New Works': Tay Spinners: breaker cards in Taybank New Works, photographed in 1989. The photo looks from North to South, the direction of the flow process, and is a step leading on from spreading, teasing and carding. Mark Watson