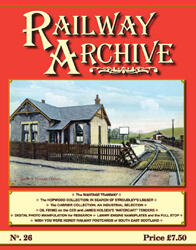 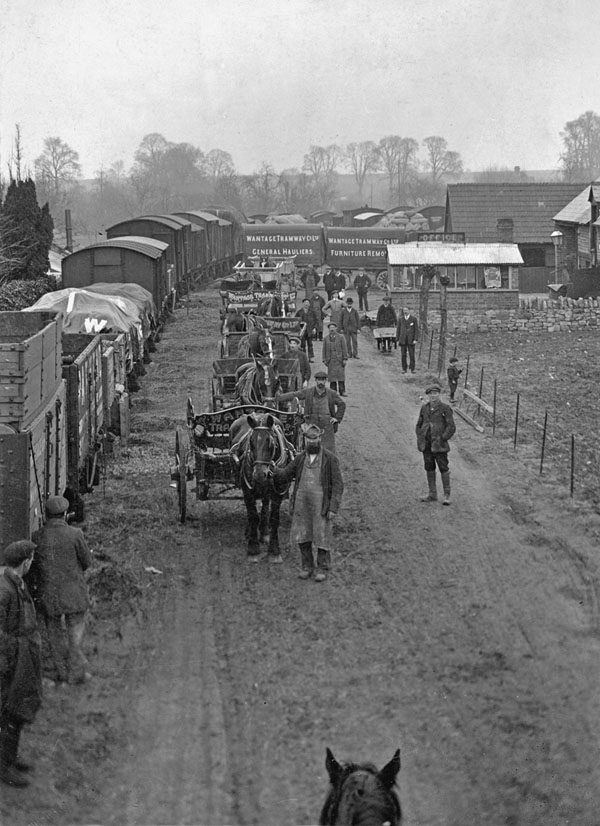 From 'The Wantage Tramway' : A magnificent previously unpublished photograph of the Wharf Goods Yard or Lower Yard on the occasion of its opening in 1905. There is much to study in the picture, which depicts the Wantage Tramway Companyâs entire fleet of road delivery vehicles â and wheelbarrow! The line up in the centre includes three 2-wheeled carts to the fore, followed by three 4-wheeled, flat-bed drays, with two 4-wheeled agricultural waggons at the rear. Behind them are two large covered vans used for general goods and furniture removals. All are lettered Wantage Tramway Co Ltd. The goods office is on the right and the yard is further crammed with an array of railway wagons, including numerous Minks and box vans of various sizes. As a final delight, manipulation of the image (see page 60 for further details) reveals that the two private owners on the left are a Parkend wagon, delivering coal from the Forest of Dean, and, with the coke boards, a Wantage Engineering Company wagon used for bringing in furnace coke. Third along, with the open door, may be a Weedonâs wagon but if so, it is in a different livery to the one on page 19. Bill Edmondson Collection