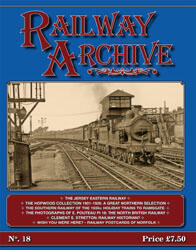 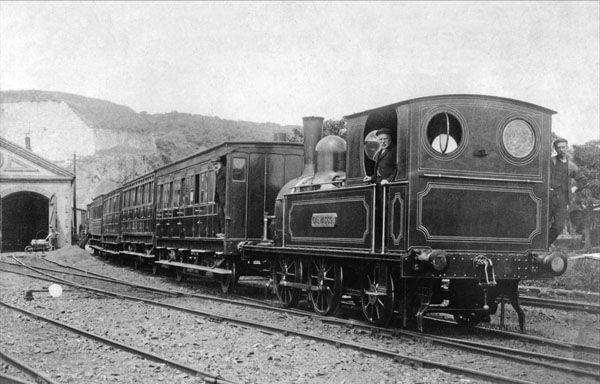 From 'The Jersey Eastern Railway': This lovely posed turn of the century photograph shows Calvados and a train of 4-wheeled carriages on the access siding to Green Street depot, between the main running line on the right and the rather ornate brick-built two-road engine shed, of which we get a glimpse on the left. The view featured in the Locomotive Publishing Company lists and was almost certainly taken on the same date as the photographs of Calvados on pages 8-9. However, this time we see the locomotive crew aboard their trusty steed, whom Peter Paye identifies in his book as driver Matt Poindestre, on this side, and fireman Peter Baker leaning out on the far side. Green Street depot foreman H. Wakley stands in the doorway of the guardâs compartment. The coaching stock is in the JER varnished teak livery and the highly decorative lining to the cab end of Calvados shows up well here. The nearest coach is the ex-Jersey Railway Brake Composite also shown in the picture on page 9, followed by an ordinary Second, a Saloon Composite, an ex-JR Composite and a Brake Second. There were no signal boxes on the system, so all points were operated by hand levers alongside. Neil Parkhouse Collection