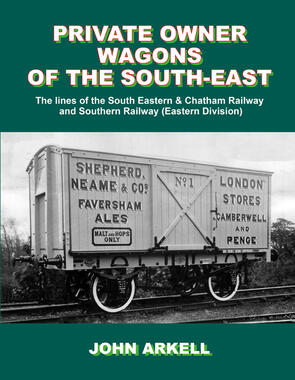 This volume continues the area studies started by Ian Pope and Richard Kelham. The book covers operators at home on the lines of the South Eastern & Chatham Railway and its successors the Southern Railway, and so covers all of Kent, part of East Sussex and the SE&CR line to Reading, Berkshire. Whilst largely a rural area it did have its own coalfield which developed much later than the rest of the British coalfields. Much of the coal trade in the south-east came by sea into the coastal ports and was distributed from there. The book is laid out line by line and is profusely illustrated with photographs and items of ephemera. It also has a comprehensive listing of all the private sidings listed in the appendix to working timetables of the SE&CR and the Southern Railway. 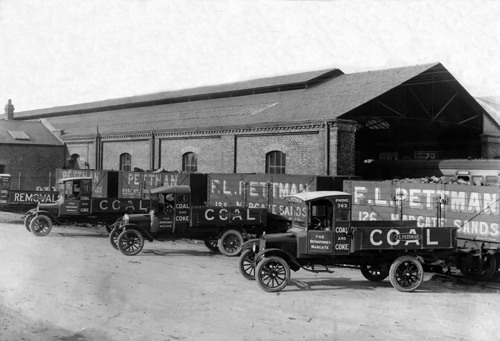 There are three distinct liveries seen here as the two wagons closest to the camera are different. The closest wagon has the shading to the large lettering separated from the lettering by a narrow strip of body colour whereas the second wagon has the shading touching the white of the lettering without a darker stripe in between. It would appear that these two wagons were black with red shading to the lettering. However, the other two wagons also have shading to the lettering, albeit the shading appears much darker â it could just be a variation in red picked up differently by the photographic emulsion. Furthermore the nearest wagon has a lifting flap over the side drop door, the latter being secured by pin and hasp. It cannot be ascertained if the wagon on the right has an end door to the right-hand end as this is off the edge of the photograph. The second wagon has side and end doors but no lifting plank over the side door. The side door is secured by drop catches. The two furthest wagons have side drop doors and lifting sections over the drop doors. There are no end doors on these two. collection Anthony Lee www.MargateLocalHistory.co.uk

One of the five wagons built in 1924 by W. H. Davis of Langwith Junction near Mansfield. The wagons were of seven-plank construction, with side, end and cupboard doors over the side drop door. They were registered with the L&NER. Livery would appear to be red with white letters, shaded black and with black ironwork. Ian Pope collection