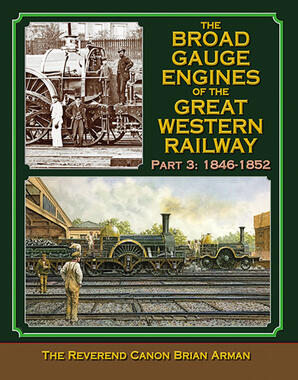 In 1843 Swindon Works opened. Equipped with the most modern machine tools and with a workforce drawn from every corner of the kingdom, the seeds were being sown for one of the worldâs great locomotive, carriage and waggon manufactories. By 1845, the works were sufficiently developed to allow the construction of locomotives to commence. Thus, from 1846, some of the most successful and technologically advanced engines in the world were produced under the guidance of Daniel Gooch. Between 1846 and 1852, seven new designs or developments of proven prototypes were produced, culminating in the beautiful 8ft 0in. âSingleâ express locomotives of theâ Iron Dukeâ and âCourierâ classes. So successful were these engines and so much in advance of their time that the type would serve the broad gauge for the rest of its existence, until its sad demise in 1892. Daniel Gooch was not only a highly competent locomotive engineer but also a pioneer of the science of locomotive testing. To this end he designed and built the very first Dynamometer car in 1847 and then conducted a series of trials with his new engines to determine their thermal efficiency, cylinder performance, running qualities, wind resistance and much more. In so doing he earned for himself the accolade, accorded by D.K. Clark in 1855, that: âMr Daniel Gooch is the only experimentalist whose results are worthy of implicit confidence, for he operated with the trains precisely under the conditions of ordinary practise. It is our conviction that they were conducted with the strictest impartiality and the apparatus was elaborated with the utmost care and consideration, worthy of the high character of Mr Gooch as an experimentalist and observer.â. 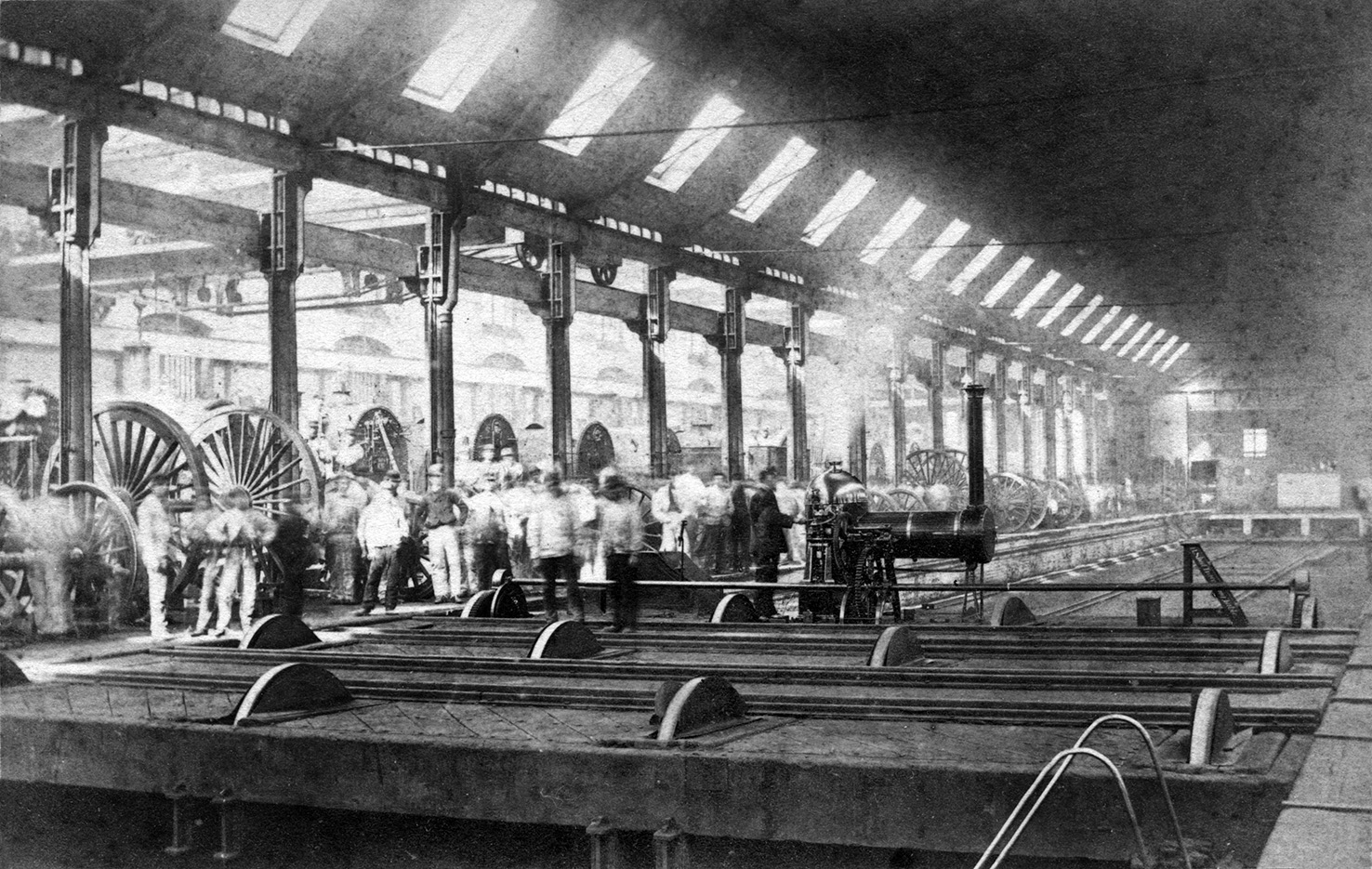 The earliest known photograph inside the works, this important and historic view shows the interior of âBâ Shed in about 1870. Also referred to as the Repair Shop, it is the building illustrated in J.C. Bourneâs famous lithograph (see Part 2, page 90). However, by the time this picture was taken, the buildingâs structure had undergone some modernisation, carried out in 1863-64. As originally constructed the locomotive bays, which were fed by the central traverser, had a low roof which not only made them dark and oppressive to work in but precluded the installation of overhead cranes. To improve working conditions and install overhead equipment it was necessary to raise the roof over the repair bays. To this end the old wooden supports were replaced by cast iron columns, evident here, and the outside wall on either side extended upward. The original âdouble riseâ roof over the traverser area was left untouched at this time, as the photograph proves, though it was replaced in 1874 when the âBâ Shed extension was added. The traverser had originally been propelled by human power but at some unrecorded date the rather pretty little donkey engine shown here was fitted, which perhaps added to the ease of working in the shed but certainly also made the atmosphere in the building fuggy and dismal. Behind the photographer, the traverser extended all the way into âAâ Shop, illustrated on pages 38-39. It is also noteworthy that mixed gauge trackwork had been laid on the traverser. It is impossible to identify any specific class of engine stabled over the pits on the left-hand side, though two pairs of 8ft 0in. diameter driving wheels suggests the presence of at least two members of the âIron Dukeâ and/or âCourierâ classes. 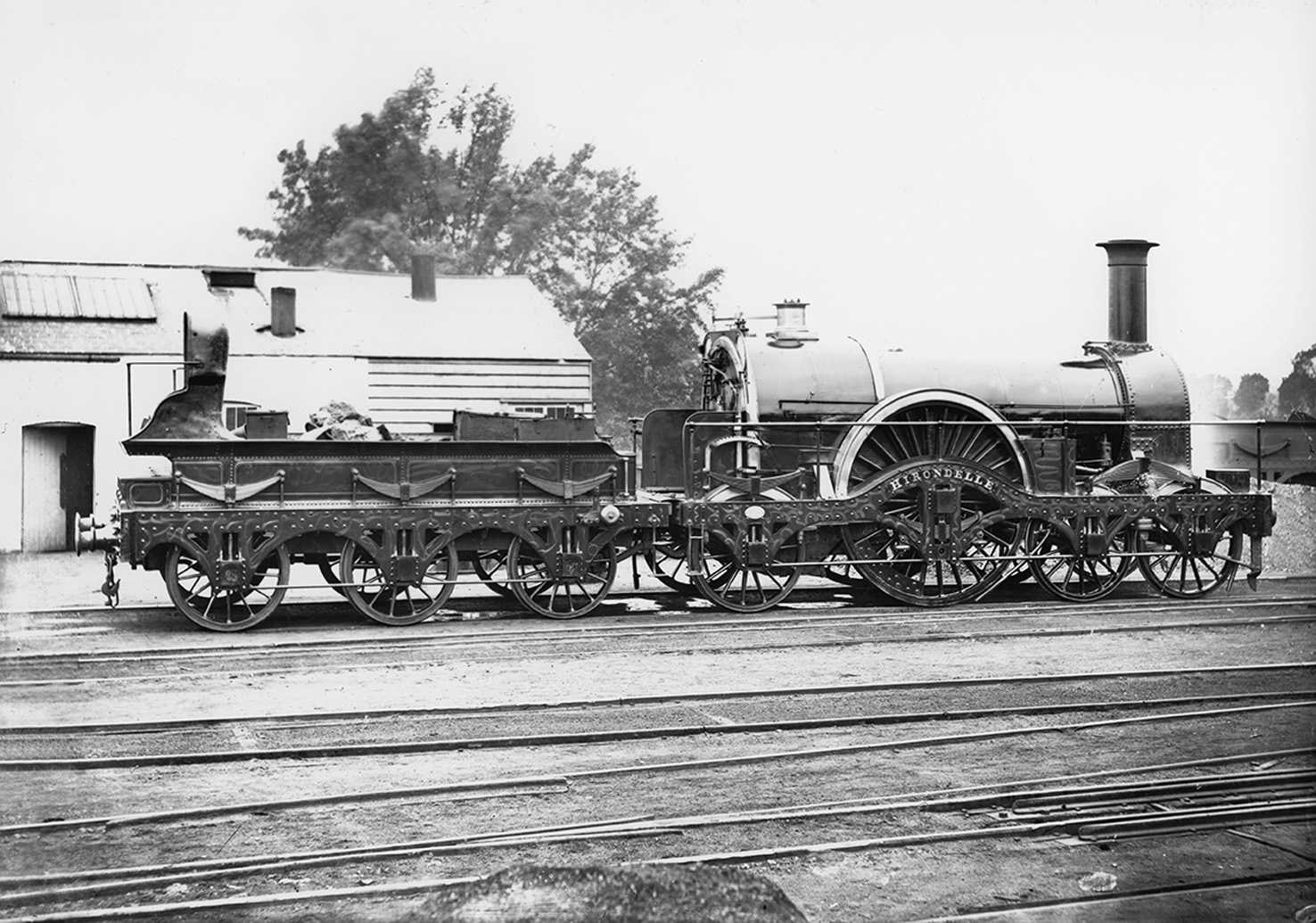 Without doubt this is the finest photograph that we possess of one of the â3rd Lotâ engines. Hirondelle was the seventh member of the group, entering service in December 1848 and was withdrawn in May 1873, replaced by a new engine of the same name. The location is again at the old OW&WR/WMR shed at Oxford, looking west with the single storey offices forming the backdrop (this was prior to the Repair Shop being built circa 1870) and the photograph probably dates from the mid 1860s, so may in fact have been taken at the same time as those of Lightning. The foreground lines are standard gauge whilst Hirondelle is standing on mixed gauge track. Judging from the fine external condition of the engine I would think that it had not long emerged from a heavy works repair, though it has not yet received some of the additional lubricators visible on Lightning. The Harrison chord bell apparatus has, however, been moved to the later position on the tender frames. The picture also clearly shows off the contemporary livery of the period and may be taken as a good example of the then usual, i.e. circa 1865, practice. The boiler bands are black edged in white as is the large sandbox, the cab, spectacles and side sheets. The tender is lined in the normal way, unlike Lightning, with four panels which line up with the centre buckle of the springs. The rear tool box is also lined, again normal practice but particularly obvious here. The lining out of the frames is less easy to make out but would be Windsor brown edged in black and picked out with a fine vermillion line. The squiggles on the framing were executed in tallow by the cleaners and were often worked up into very elaborate designs, at the behest of the drivers. There are several different local names given to this practice but at Swindon it was always referred to as âswizzlingâ.Â