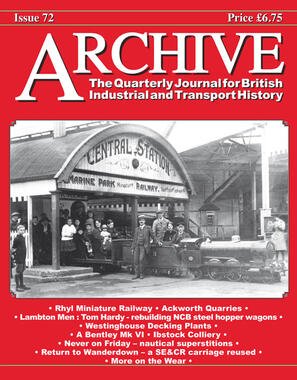 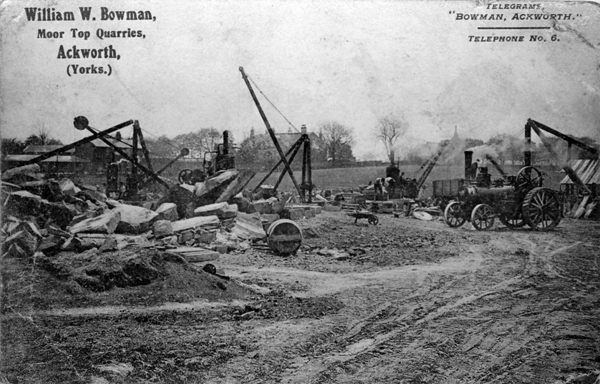 From: 'Ackworth Quarries' : The top of Bowmanâs quarry with numerous cranes apparent, all apparently, bar that in the centre, steam operated. That in front of the traction engine could well be rail mounted as might the one beyond the pile of stone on the left. There is a single grindstone visible whilst the two men to its left could be dressing others. Of the traction engine it is believed that it could be Mclaren No. 949, an 8HP compound supplied new on the 18th October 1907 to Samuel Whitfield of Conisborough who named it Dreadnought. Bowman actually purchased two Mclaren traction engines from Whitfield, the other being No. 685 an 8HP single cylinder example. Bowman also had a third Mclaren, No. 330, another single cylinder 8HP engine which was the first that he acquired from his takeover of the quarries of George F. Camplin in Ackworth post 1906. Of the engine seen here Bowman had disposed of it by 1921 when it was registered WR 8498 to a George A. Wilson of Wadeley Bridge and by 1931 it was owned by Edwin Knowles of Braithwell who still had it in September 1943. Bowman retained No. 685 until at least May 1936. Behind the engine is a traction engine wagon used to haul the stone to the customer or to the nearest railway station for shipment which would have been Ackworth Station on the Swinton & Knottingley Joint Railway of the Midland and North Eastern railways. Pope/Parkhouse Archive 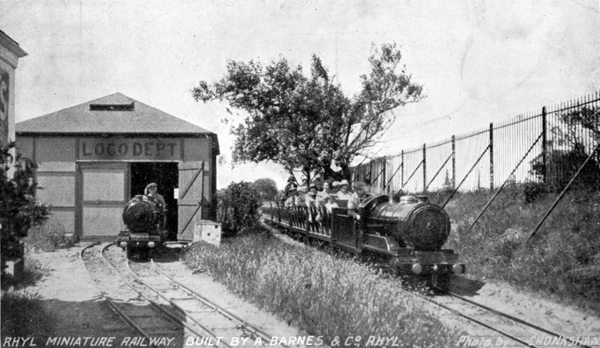 From: 'Rhyl Miniature Railway' : One of the early Barnes âAtlanticsâ passes the engine shed with a second stood outside it. Note that there is a difference in the buffers between the two which might be an aid to identification if images of all of the locomotives could be found on which the names were clear. John Ryan collection