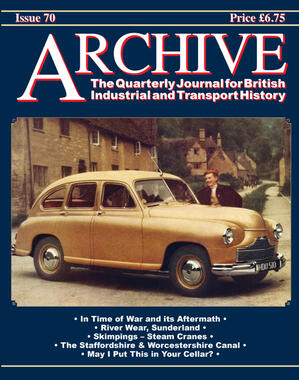 Contents: In Time of War and its Aftermath by Malcolm Bobbitt, p. 3; River Wear, Sunderland, notes by John Lingwood, p. 25; Skimpings: Steam Cranes, p. 27; The Staffordshire & Worcestershire Canal, notes by Euan Corrie, p. 33; May I Put This in Your Cellar? by Keith Turton, p. 39. 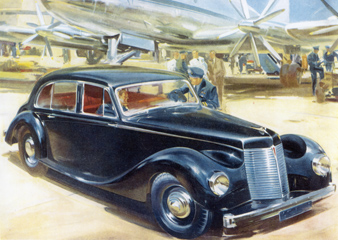 From: 'In Time of War and its Aftermath' : The immediate post-war years saw a number of emotive publicity items that portrayed scenes connected to the war effort. This Armstrong-Siddeley Lancaster sales artwork is one such with its aviation theme but it has to be mentioned there is an element of artistic licence about the scene to make the car appear far larger than it was. The 6-light Lancaster was in production from 1945 until 1952 after which the Whitley was the mainstay of saloon output. Under the bonnet there was a 1,991cc straight-six ohv engine which was later uprated to 2,309cc. Automatic transmission was available courtesy of a Rootes four-speed gearbox but owing to the size and weight of the car the performance was never anything but gentlemanly. Malcolm Bobbitt collection 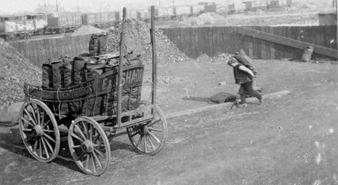 From: 'May I Put This in Your Cellar?': The completely manual coalyard of E. & A. Shadrack in east London.