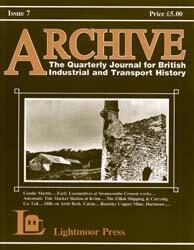 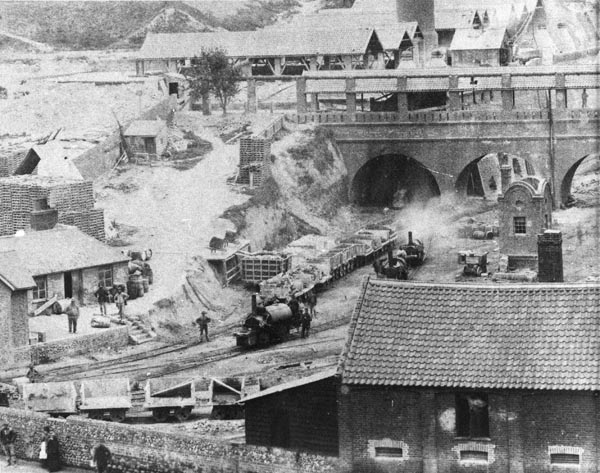 From 'Early Locomotives at Swanscombe Cement Works': An enlargement from one of the main set of photographs â a grand picture depicting the entire locomotive stock circa 1874. Obviously a posed shot and, assuming the Lewin of 1873 predominant in the foreground as the most recent acquisition, probably taken soon after delivery. This locomotive has much in common with the engraving in Engineering of March 12 1875. The most noticeable differences lie with the saddle tank apparently extending over the firebox, seemingly a higher footplate and a traction engine type fender to the rear. As far as can be ascertained, the cylinders, motion and valve gear are very much the same on both examples.As Lewin's first locomotive, it may have proved to be too heavy and/or top heavy, leading it to be deemed as useless by 1880, the manufacturer by then having revised his design to provide for the addition of a smaller saddle tank if required. Examination under a strong magnifying glass of the following two locomotives, presumably 'Jackson's', reveal a number of characteristics taken up by Lewin â well tanks, stove-pipe chimneys and domes well forward on the boilers, with typical outside steam pipes to the cylinders. These appear to have the rocker arms with fulcrums on the front cylinder covers to actuate the valves on the top of the cylinders, very much akin to the arrangement on the later Lewin ERITH. A fourth locomotive may be discerned under the arch of the viaduct, which served as the engine shed for many years â note the smoke blackened brickwork. Also worthy of comment is the varity of wagons present, some five basic types in all. In the foreground is a rake of chalk or 'slip' wagons, one of which is in a 'sub' class being two-thirds the size of the remainder. Note the unusual disc pattern wheels and also one of the smaller variety in its tipped mode alongside the strangely ornate building in the right corner of the picture. Directly behind the Lewin locomotive a large square latticed wagon is in the process of being loaded with staves from the nearby stockpile, whilst the adjacent road has three main types of wagon loaded respectively front to rear with clay, coal and coke. Blue Circle Industries plc, Technical Centre 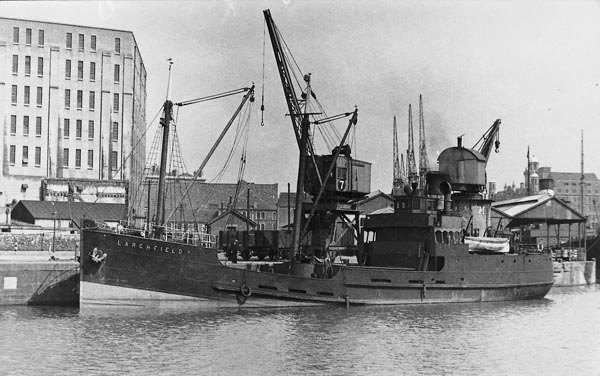 From 'The Zillah Shipping and Carrying Co. Ltd.': After taking delivery of seven ships of the Ashfield design from Lytham, Zillah adopted a revised design from 1937. The wheelhouse â now enclosed â was moved aft, the crew were accommodated in the poop and a cruiser stern replaced the elegant counter stern design which had persisted from sailing ship days. The funnel was slightly smaller, reflecting the fitting of a forced-draught fan. The position of the masts and derricks, ahead of the holds they served, was not greatly altered though. Seen here in Bristol, Larchfield was one of the smaller ships to this design and the last to be completed, in October 1941. She was already obsolescent when built and competition from the more economical motor ship meant she had a relatively short career. She arrived at the Barrow shipbreaking yard of T. W. Ward Ltd., on 2nd February 1957. She was only 25 â half the age achieved by Ashfield. World Ship Photo Library