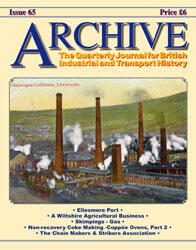 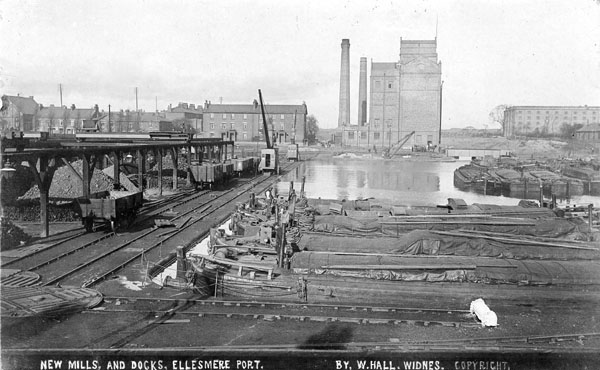 From 'Ellesmere Port' : Another early twentieth century view from the embankment of the Upper Basin across the Lower Basin at Ellesmere Port. The grain elevator and mills dominate the background which also includes (at the street corner towards the left) the earlier Grosvenor public house. Its much grander rebuilt form appears in Image D. All along the left-hand side of the picture the Raddle Wharf is dominated by the ore gantry. This supported a travelling crane on which small tipping trucks were carried so that ore discharged from ships or flats could be carried back from the quay edge and deposited easily onto the stock piles. The basin is crowded with Shropshire Union flats, some transom- sterned former sailing vessels. Directly descended from north west Englandâs local sailing barges these craft are mostly dumb vessels that would make their crossings to and from Liverpool Docks behind a steam tug. The Shropshire Union Railways & Canal Co. had a substantial fleet of such vessels that had been built up since the constituent Ellesmere & Chester Canal had begun its Mersey barge service in 1838. They would transship many of their cargoes at Ellesmere Port to canal narrowboats. There is little activity and only a few crew are present suggesting that the picture was taken on a weekend â although two of the flats have their hatch covers open they are not positioned for loading or discharging. Notice the coils of heavy towing lines on some of the nearer vessels ready for use when they were formed into trains for steam towage across the Mersey. A surprising feature to modern eyes is the water level in the basin. For many years now this has been kept artificially low in an attempt to reduce maintenance costs. As the lock gates and dock walls have been neglected any level has become more and more difficult to maintain and as a result of the fluctuations the walls have become unstable and collapses have occurred. Naturally the old Shropshire Union company kept the water levels throughout its system as high as possible since its toll revenue depended largely on boats being able to load the greatest possible tonnages which resulted in full use of the available draft. Mike Day Collection 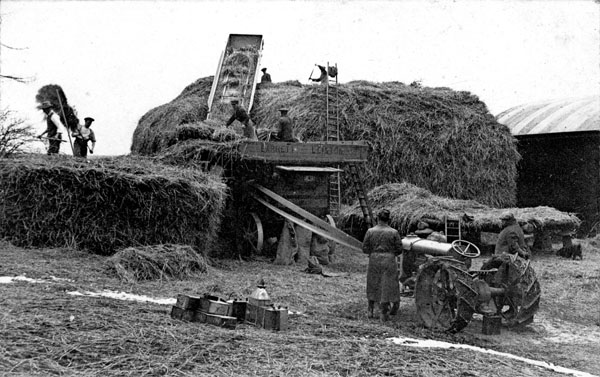 From 'A Wiltshire Agricultural Business': Tractor - Here all the cans of fuel for the Fordson can be seen in the foreground and the âmechanicâ of the team stands by his charge. The length of the sheaves leads one to think the crop being threshed is oats. In the view below note the last remains of a stack on the right which had been built on a timber frame supported by staddle stones to help dry the sheaves and reduce the attack by rats. R. Selbourne Collection