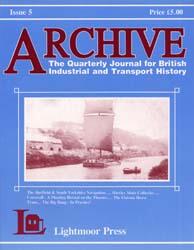 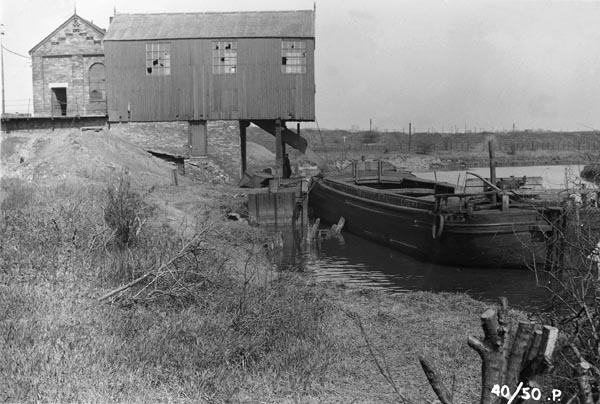 From 'The Sheffield and South Yorkshire Navigation': Roundwood staithe, photographed in 1950, was typical of several rail-fed colliery loading points on the S. & S. Y. N. Coal from both Roundwood and Silverwood (Dalton Main) collieries was loaded into barges here, on a 6 am to 2 pm shift at the rate of 5 vessels per day. The 10 ton end-tipping wagons were pushed by a steam locomotive up an incline, whence gravity took over and they were run down one by one into the covered part of the staithe, being tipped by their own momentum and pouring coal down the chute. The two collieries were connected underground, the shafts at Roundwood having been closed in 1909. Coal from Aldwarke was also shipped to barge here from the mid-1920s, as its own staithe became workable due to subsidence, containing a coal-fired cooking range and a boiler for hot water, where the keelmen's wives were able to do their laundry and baking whilst waiting to load. The wooden motor barge Reliance, owned by Waddingtons of Swinton, is seen preparing to load coal for Doncaster gasworks. Barnsley Canal Group 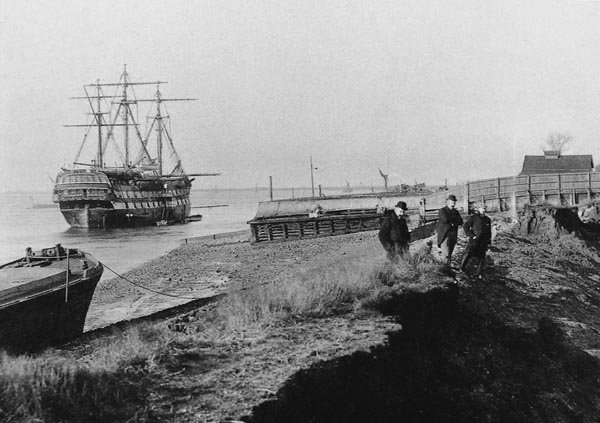 From 'Cornwall: A Floating Borstal in the Thames': A view of Cornwall taken in the 1890s from the Purfleet bank. Although the vessel appears to be still in generally tidy condition, she has been deprived of some of her upper yards and also her topgallant masts. She is moored so that her bows rather than her stern face up-river, so that there is less resistance to the forces of the ebb-tide (normally stronger than the flood tide). The picture was taken at about low water and shows that, at times, the strip of water between ship and shore was very narrow indeed. In July 1901 Cornwall was moved down-river about 300 yards due to development at Purfleet. A new wharf for the area's chalk quarries was constructed and it was felt that she would be in the way of shipping using it. The tragic consequences of such an occurrence were borne out years later when, in the early autumn of 1915, a petty officer and 16 boys were drowned when their cutter was in collision with a tug off the pier at Purfleet. A survivor said that they thought the tug would give way to them but she held her course. This put paid to further boat work under sail and, thereafter, only pulling boats were used between ship and shore. The regularly occurring epidemics were due to a combination of appalling hygiene standards and poor diet. For instance, another typical typhoid outbreak in 1903 was traced to a supply of army surplus blankets â from Boer War hospitals â boughtvery cheaply and shipped home in bales without being washed or disinfected. Incredibly, they were stored and issued without their dirty condition being rectified. The deficient diet meant that the boys stood little chance of fighting off these outbreaks. In February 1906, Dr. Macalister conducted an important enquiry into the health of Cornwall's boys on behalf of the H.O., following yet another typhoid epidemic. They were scandalised at his description of living conditions on board and wanted all of his recommendations adopted, although the ship's managers quibbled at the expense of doing so. He also reported on the boys' dietary. He said that milk had only been introduced six weeks previously and that the dietary had 'recently been improved' so goodness knows what they got before...