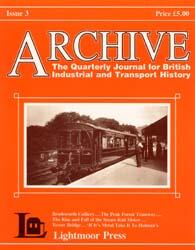 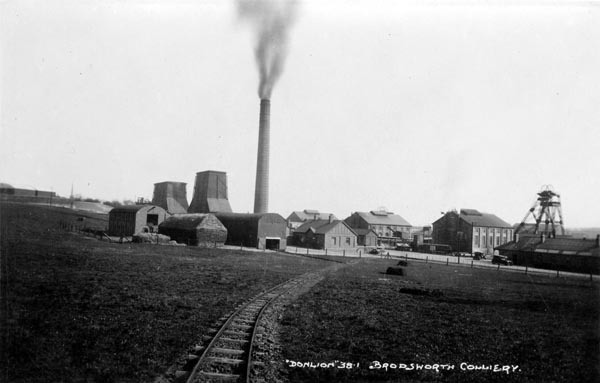 From 'Brodsworth Colliery and Model Village': An interesting late 1920s view of the mine, looking in a south-easterly direction. In 1923 a third shaft was sunk to the Barnsley seam and the steel headgear built to serve it can be seen on the right. A new engine house, No. 3, was also provided (Nos. 1 and 2 headframes are obscured by the engine houses). In the centre, new brick-built colliery offices have appeared and a second cooling tower, with a capacity of 200,000 gallons per hour has risen on the left. Finally, on the left, can be seen the corn and hay stores for the colliery's complement of pit ponies. When the pit passed into the hands of the NCB in 1946 there were 43 ponies employed here. Of particular interest in this view is the narrow gauge railway running in from the foreground, which appears to be of 2 foot gauge. Its exact use is uncertain, as is the nature and purpose of the building it runs into, and it is not shown on any of the colliery maps so far located. The only building located in the area which it ran to (behind the photographer) was the colliery magazine, so possibly it was used to transport explosives. Although the line seems to have been lifted by about 1930, there is a listing for a 2 foot gauge locomotive in the 1946 statement of assets, an 0-4-0, 20hp diesel engine built by Hunslet's (Works No. 4200). Further information on this line would be welcome. There is also an interesting message written on the back of the original postcard: 'How many times in 40 years I was in this colliery I wouldn't know but the H & B Rly was no joyride for the the footplatemen. I hated it like hell in the Wintertime. Sammy L'. This part of Yorkshire is quite flat and conditions on the footplate, with a hard nor' easter bringing stinging rain and icy snow in off the north sea can be imagined. John Ryan Collection

From 'The Rise and the Fall of the Steam Rail Motor': One of the final batch of SRMs built by the GWR in February 1908. No. 95 is seen at Himley on the Kingswinford branch in 1905. These were 70ft long, seating 61 passengers, and had the benefit of the centre-fitted compartment doors, many of the earlier machines having their passenger access through the driver's vestibule. This view provides an interesting comparison with that of the earlier unit at Stroud and shows how the design had developed in the intervening three years. However, unlike those of most of the other companies, the GWR machines were gas-lit and resolutely remained so until their demise. The Kingswinford branch, from Brettell Lane to Oxley, was opened as a through route as late as May 1925 and came about as a result of the opening of a number of new collieries at Baggeridge near Himley. From Kingswinford Junction, just north of Brettel Lane, the first 3 miles of the line utilised the old Kingswinford mineral branch, which was relayed and doubled. The rest of the route to Oxley Branch Junction was single track. The passenger services were poorly patronised and were withdrawn in 1932 but the line remained open until 1965, being used as an avoiding route for the busy Snow Hill â Wolverhampton line, as well as for goods traffic. The rural appearance of the station belies the industrial nature of the area just to the west of here, at this time, with the development of the Earl of Dudley's collieries. John Alsop Collection