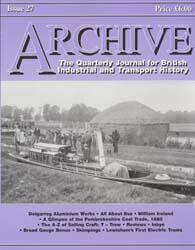 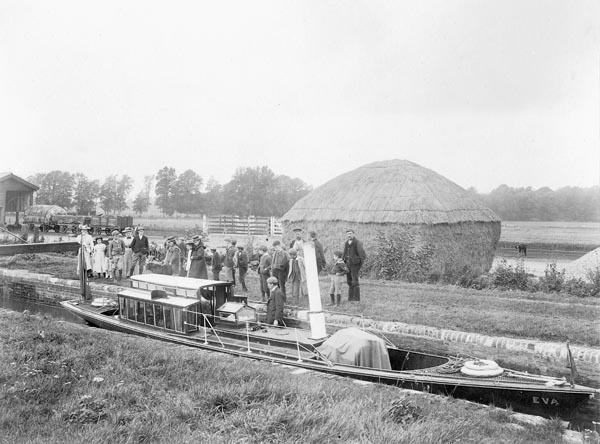 From 'All About Eva': Despite the wealth of detail and number of clues, we still do not have a definate answer as to this location. Eva is in a lock and being admired by a crowd. In the background is the railway with some goods wagons in a siding. After refering to track diagrams Lock 29 at Kintbury was opted for. Track Layout Diagrams of the GWR, Section 23, Berkshire (R. A. Cooke) shows that facilities at Kintbury included a goods shed and cattle pens. The end of a timber-built goods shed can be seen on the left, whilst cattle pens are visible just to the left of and behind the haystack. The coal wagon, an ancient looking vehicle with dumb-buffers, belongs to the Radstock Coal Company. This was started in 1868 by William Beacham, who also ran the Radstock Wagon Company. In 1876 he decided to gentrify his name to Beauchamp. The Waldergrave family were unimpressed by this and involved him in a lawsuit in 1878. Eventually his son Frank took over the firm and in 1894 changed the name to the Radstock Coal & Wagon Company. This further fixes the likely date of the photograph at or before 1894. There are other points of interest in this photograph. There is a sheeted wagon loaded with hay and a railway employee by the track in the right background, with possibly two more in the foreground. Rosemary Harden pointed out that the little boy second from right appears to be wearing a uniform. It cannot be the scouts, the date is too early, but there were earlier youth organisations. Meanwhile, the passengers can be seen in the cabin and this photograph also shows the fretwork deck covers. Neil Parkhouse/Ian Pope Archives 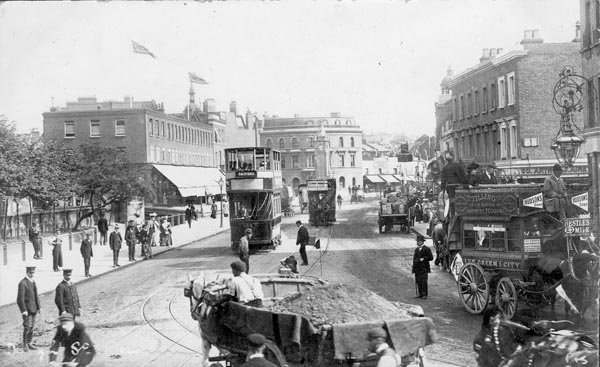 From 'Lewisham's First Electric Trams': A view of Lewisham Road looking south, towards the clock erected in 1897. The Thomas Tilling horse bus on the right, en route to Gracechurch Street in the City via Deptford and Rotherhithe, is just entering Loampit Vale and thus about to climb Loampit Hill. A board just below the top deck handrail advises that Tillings Riding School at Peckham is now open. The motorman of 'B' class car No. 155 appears to be waiting for some reason before moving off; possibly for some minor work to be completed on the track or perhaps he was just waiting to have his picture taken! - notice how many of those on the left are aware of the photographer. Car No. 155 was built in 1903 as an open top tram seating 56, converted during 1906 by the addition of an enclosed top deck, increasing capacity to 74, and lasted in use until scrapped in 1925. The horse tram in the distance has come up from Rushey Green. A selection of delivery carts are also to be seen, the one in the foreground laden with spoil, possibly from work underway on extending the tram lines. Note the red flag in the road just beyond it and the two tram officials in the left corner of the picture.