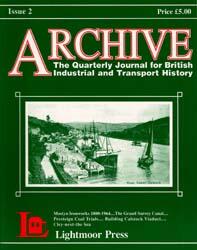 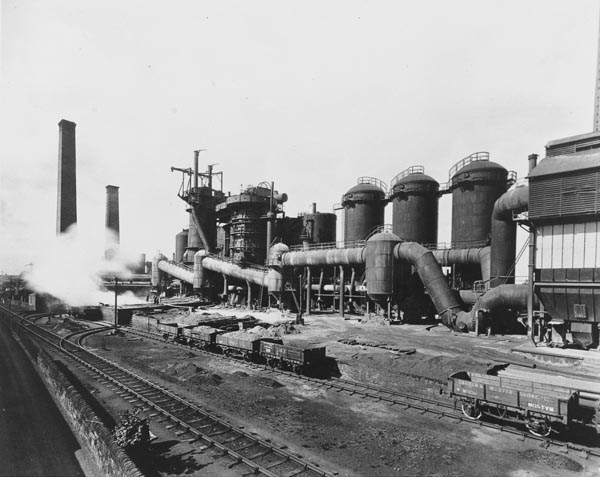 From 'Mostyn Ironworks, 1800-1964': This photograph, taken from Halendy footbridge in the 1940s before the building of the new furnace, shows the the crude gas main, the dustcatchers and part of the gas cleaning plant in more detail. The clean gas main can be seen running back in front of the stores. Despite the dustcatchers, the crude gas main tended to build up with dust and had to be cleaned out manually from time to time â approximately six monthly intervals. The furnaces had to be damped down for 8 hours and men entered the main, shovelling the dust out via the dust legs, also seen in this picture. The four wagons, centre left, were for internal working only and are being filled with the dust removed from the gas pipes. The wagon on the right is a low sided 10 ton tipper, built for the Ironworks by the Midland Wagon Company of Birmingham. The pig bed shed and crane were not yet built; during war-time the taphole and slag runners were covered by small, most uncomfortable lean-to sheds. During a raid the furnace was taken off blast and casting delayed. Slag was only tipped during daylight. The two chimneys on the far left are connected to the boiler house. The taller one was built in the 1890s, the then furnace manager, Mr. Adams, was accorded the dubious pleasure of being winched up inside in a barrel, right to the top. The view was said to be spectacular as there had been a recent fall of snow. The descent was not so pleasant though, as on the way back down the barrel began to spin! Copyright, Mostyn Historical Preservation Society 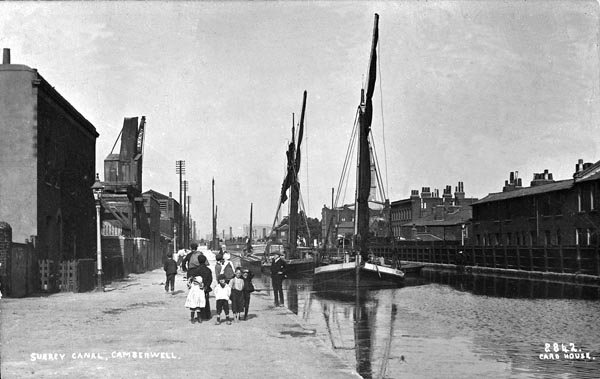 From 'The Grand Surrey Canal': Edwardian industrial London at its finest! On what is obviously a beautifully sunny day some of Camberwell's younger inhabitants come and pose for the photographer. The view is looking east, which must make it late afternoon judging by the shadows, and a pair of Thames sailing barges are tied up at Baltic Wharf, about 300 yards short of Camberwell basin, terminus of the canal. The tower of St. George's Church, so often a landmark in early views of this area, can be seen peeping out from behind the mast of the nearer vessel. It is the only building still surviving from this photograph and is in the process of being converted into flats. Just beyond the second barge, Wells Road bridge is visible with people crossing, and in the distance the gasworks can be made out. The industrial complex prominent on the left is Burtt's Lime Works, which closed in 1916. It had been established very soon after the arrival of the canal here in 1810 and undoubtedly would have been in great demand with the building boom that was starting. The brick-built lime kiln survives today as a solitary reminder of Camberwell's canal and industrial past, in an area that is now all grass. The block just past the lime works housed a whiting works, where clay was gorund to make whitewash and for use in cleaning plates. A number of these works flourished alongside the canal. Brian Girling Collection