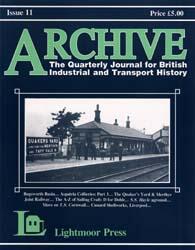 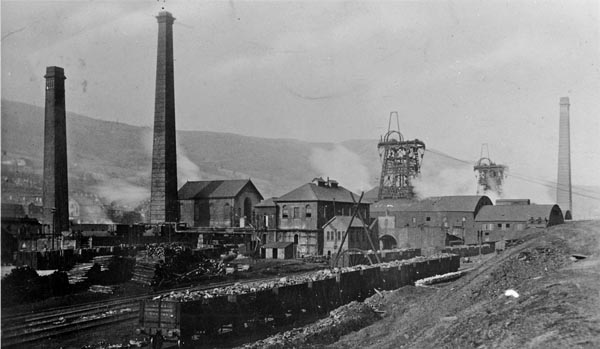 From 'The Quaker's Yard & Merthyr Joint Railway': A view of Mwethyr Vale Colliery, also sometimes locally referred to as Nixon's Navigation Colliery after the company which developed and owned it. Having commenced sinking operations on 23 August 1869, coal was finally found when the Four Feet seam was struck at a depth of 1,485 feet on 1 January 1875. Two shafts were sunk and the first coal was wound on 4 December 1875. In 1930, Nos. 1 and 2 shafts were deepened to 1,626 and 1,608 feet respectively. Prior to nationalisation, the working of the colliery was taken over by the Powell Duffryn Steam Coal Company Ltd. A number of different seams were worked during the pit's life, including Gellideg, Yard, Nine Feet, Seven Feet and Five Feet, the colliery finally closing in 1989. The 1966 Aberfan disaster was caused by the slippage of waste from Merthyr Vale's spoil tips. At the time of these photographs â circa 1910 â some 3,400 men were employed at the mine. 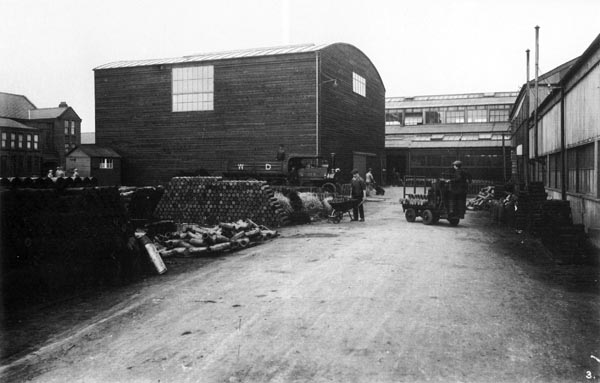 From 'Cunard's Shellworks Liverpool': The rear year of the works was laid out on land purchased in 1915. This view from the north shows it dominated by the large timber-framed building which housed a hydraulic accumulator and shell presses. To its rear and to the right are the extensions to the original part of the works, constructed in autumn 1915. To the left outside the work's boundary is St. Leonard's church hall in Shakespeare Street. Within the yard are neat stacks of forgings awaiting machining. The less tidy heaps of forgings and part-finished shells are probably rejects awaiting collection for salvage. Within the yard, boys move goods around on small trolleys, while in the centre is a Ministry of Munitions steam wagon, 138.B, manned by uniformed soldiers. The Foden S-ton steam wagon pictured here had cast-iron wheels and solid tyres, and was the standard heavy lorry used throughout the war by the army. Unusually for a munitions factory Cunard's was not served by a rail link and was entirely dependent on road transport for movement of shells to and from the factory. In practice, as the war progressed road transport was increasingly preferred for short journeys to relieve the pressure on the rail network. BL 24001-3