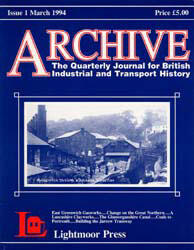 
Various authors as listed in contents 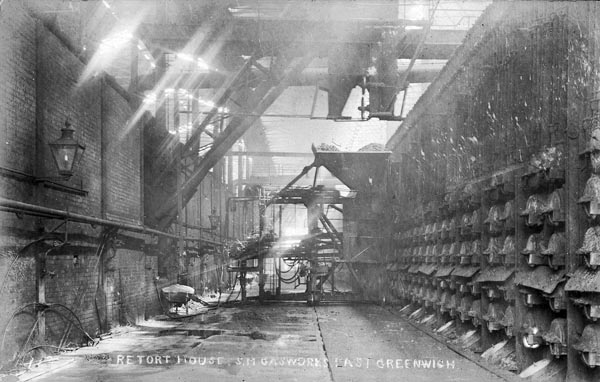 From 'East Greenwich Gas Works': Inside one of the retort houses with shafts of sunlight streaming through the rooflights showing that even in the design of these traditionally Dante-esque settings the South Metropolitan was trying to improve the lot of its workforce. Here an automatic hydraulically operated stoking machine is seen in use. These were efficient machines, cheap to use and doing what was probably the dirtiest and most arduous job in a gasworks. The horizontal retorts were oval fire-clay pipes twenty feet long which were charged every ten hours with a load of 11cwt., of coal and heated by furnaces maintained at a constant temperature â around 1,300Â°Centigrade. The furnaces, underneath the retorts, were charged and stoked by hand. There were 2,250 retorts in total arranged in banks as here. Having yielded its contents of gas the coal, which has now become coke, was rammed out of the opposite end to be cooled by men with hosepipes, before being loaded into the railway wagons again and taken off to the storage yard and hoppers from where it was sold to local fuel merchants. The gas was piped off to the gas holders, via condensers and cleaners, through the iron ascension pipes seen rising vertically from the retorts. 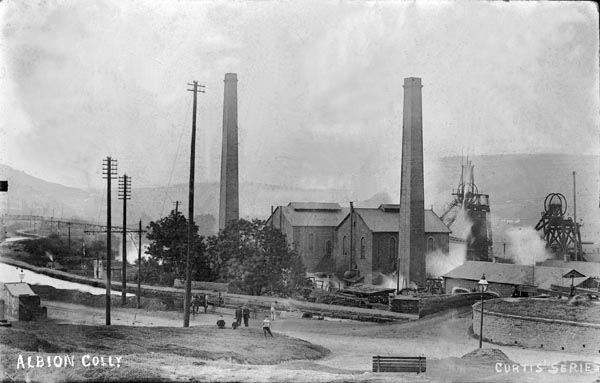 From 'The Glamorganshire Canal at the turn of the century': The valley floor stretch of canal from Navigation south to Pontypridd was broken in 1885-7 by the sinking of the Albion Colliery, adjacent to Ynyscaedudwg Lock (number 25). The open lower lock gates can just be seen to the right of the bridge in this picture postcard of 1906, one of a series of the locality published by Curtis. The photograph is included here because it depicts a byetader's boat being loaded with small coal, probably destined for one of the patent fuel works lower down the canal. The man in the bow, near to the horse and cart, is using his shovel to trim the load round the towing mast. The boat's horse is presumably resting in a field or at stables nearby. The coal wharf would have been sited on the opposite side of the canal from the colliery in order not to restrict the towpath. Adjacent to the coal heaps can also be seen the terminus of the electric passenger tramway from Pontypridd, which brought workmen to the pit. In the four years from the sinking of the Albion over 500 houses were built nearby, creating the village of Cilfynydd. The trestle footbridge crossing over canal and railway, and running from village to colliery, can be seen in the southern distance. At the Albion, in 1894, occurred one of South Wales' worst underground explosions, which resulted in the deaths of 287 colliers. The colliery was also the source of much concern to the Canal Company as they suffered regularly from subsidence from as early as 1890. In July 1915 a serious breach occurred, beyond the footbridge in this photograph, which swept away the railway as well. It was never repaired and the canal became effectively closed north of Pontypridd. Stephen Rowson Collection