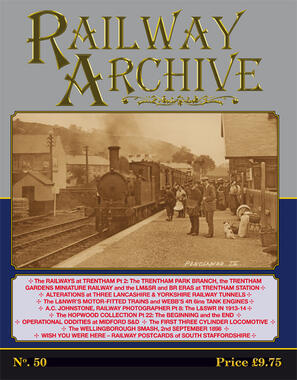 From 'The Hopwood Collection 1901-1926 Part 22: Alpha and Omega' : One of Englandâs most historic and beautiful cities is unquestionably York. It is also a site of great ecclesiastical and civic importance, and was an early target for the expanding railway network, especially those lines controlled by George Hudson, himself a citizen of the city. Yorkâs fi rst railway terminus was a temporary affair opened on 30th May 1839 but it was replaced by the buildings seen here, opened with great celebrations on 4th January 1841. Positioned inside the city wall, they afforded easy access to the town and Minster, which is just visible in the left background. Yorkâs importance as a pivotal railway junction, however, ensured that this small, cramped and inadequate terminus would have a relatively short life and it was replaced by the present magnifi cent edifi ce in 1877. The old station continued to be used for goods and stock stabling for many subsequent years, as this view taken on 11th July 1925 demonstrates. LCGB REF. NO. H2019