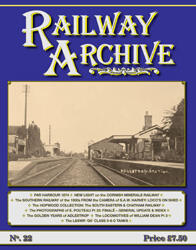 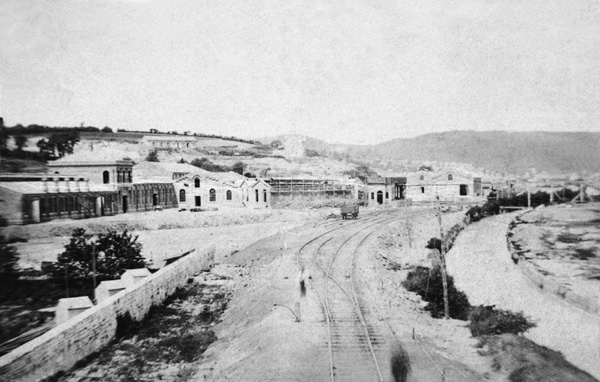 From 'New Light on the Cornwall Minerals Railway': The new headquarters of the Cornwall Minerals Railway nearing completion in 1874. There was a footbridge spanning the track adjacent to the level crossing at the south end of the yard and the photographer had clearly set up his camera on it to take this shot. Apart from the railway interest, this is almost certainly the best early view of a section of Treffryâs Canal, on the right, complete with lifting footbridge. In the centre, the work in progress on the roundhouse roof is indicated by the scaffolding poles, with the large water tower visible to the right and the CMR Wagon Works beyond. This remained in use for wagon repairs throughout the GWR and BR periods and still fulfills this role today. A locomotive, one of the CMR 0-6-0Ts, is just visible to the right. The roundhouse had nine roads, an unusual number but Peto must have had a methodical mind â the eighteen 0-6-0Ts could be accommodated in pairs inside, which is how they were designed to work. The centre roads extended through into a larger building seen here, part of the engineering works, the whole complex being joined as one. Note the crude point lever in the centre foreground and also the two âghostsâ of workmen who have moved during the long exposure required to take the photograph. In the centre distance, above the unfinished roundhouse roof, can just be made out the site and remains of West Fowey Consuls tin mine. Courtesy Dr. D. Hadley