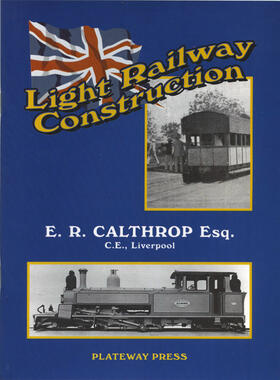 A reprint of a paper originally published in 1897 by the engineer to the 2ft. 6 ins, gauge Barsi Light railway in India. In it he sets out the general principles of narrow gauge construction and operation and makes the case for the adoption of the 2ft 6ins gauge as a light railway standard. Building on his experience on the Basri Railway, Calthrop went on to create the Leek and Manifold Light Railway, one of the few commercial applications of the 2ft 6in gauge in Britain and the only common carrier railway to use transporter wagons. This paper, published in permanent form for the first time, gives a valuable insight into the theories of its creator, and acts as a valuable additions to the published data on narrow gauge and Light Railway design and construction.