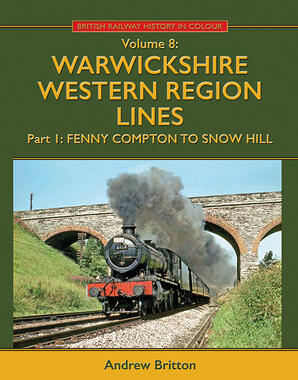 North from Oxford, the construction of the main line from London to Britainâs second city was projected by the Birmingham & Oxford Junction Railway but by the time the first part of it opened, between Oxford and Banbury in 1850, the company had been absorbed by the Great Western Railway. The section covered by this book, north from Banbury to Birmingham, was opened by the GWR on 1st October 1852 and we begin our journey along this route just south of Fenny Compton, where the line crossed the county boundary between Oxfordshire and Warwickshire. This was a line built originally to the broad gauge that proved eminently suitable for fast running and which, in steam days from the late 1920s, became the preserve of âKingsâ and âCastlesâ hauling crack expresses between London, the Midlands and the north-west. Between Banbury and Birmingham it also served the historic towns of Leamington Spa, Warwick and Solihull, as well as the important industrial and manufacturing region that had grown up on the approach to Birmingham city centre. There was also therefore a plethora of interesting freight to be photographed, with âBR â9Fâ Class 2-10-0s to the fore in the period covered herein but with a varied selection of other types involved as well. Finally, north from Leamington, there were also the stopping services to and from Birmingham, plus some to and from Stratford-upon-Avon via the junction at Hatton. To add to all this interest, there was a medium sized steam shed at Leamington and a major locomotive depot at Tyseley, both of which we visit in detail, the fearsome 21/2 mile climb of Hatton Bank (requiring a banker for most northbound freights), Rowington Troughs and the sadly now lost GWR city centre station at Snow Hill. Author Andrew Britton grew up in Leamington, trainspotted on the platforms and made regular visits to the shed courtesy of neighbour who was a driver, and now lives in Warwick so is intimately acquainted with the area. Whilst the line and most of the stations within are still open, much has changed, so this is a welcome chance to step back in time and enjoy the sights of a busy ex-GWR main line in the last decade of steam â with Blue Pullmans and a few early diesels â and all in glorious colour!