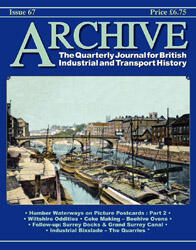 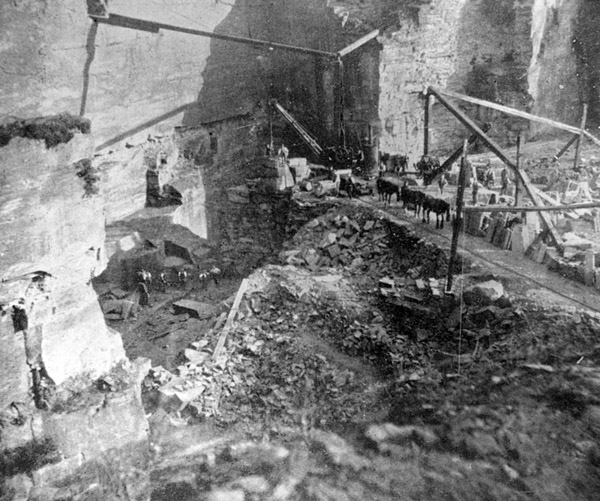 From 'Industrial Bixslade' : Taken in the early 1900s this view looks down into the Bixhead Quarries with one of the tramroad branches coming in from the right with a bogie stone wagon and three horse team waiting for a block to be swung out by the crane. Notice how the supports for the steam crane are built into the quarry face opposite. A smaller hand- operated crane is to the right supported by the timberwork to the right. 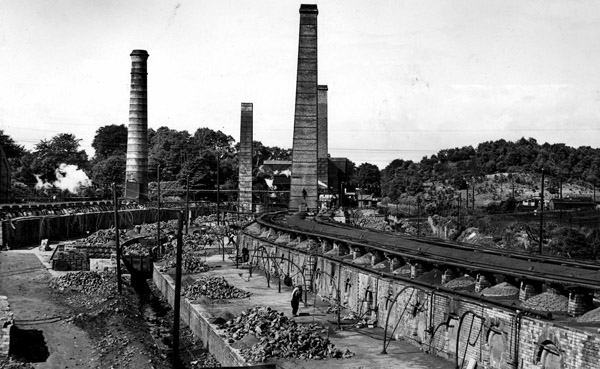 From: 'Non-Recovery Coke Making in the UK': In this view, looking west over the coal preparation plant end of the long battery, many activities can be viewed taking place on the high bench. Nearest the camera George Carty is using the peel suspended from a crane, to empty an oven and further down the bench a leveller is dabbing up a bricked doorway to seal out the air. He has a wheelbarrow containing the lime/clay/sand mixture close at hand. Many fillers can be seen at work loading wagons positioned along the gullet by a locomotive. Loading from the low bench was an exhausting task, as the lift required, over a working shift, would be substantial compared with the high bench, where coal could practically be dropped into the wagons. Consequently the number of wagons to be filled per shift was less from the low bench. The early boiler cluster in front of the right-hand square chimney has disappeared by this time and a small part of the power station can be seen on the far left of the picture. On the far end of the long coke oven battery, the coal preparation plant with the bogie loading arrangement can be seen. An interesting detail that can be seen in this area of the works is the quenching water pipe running along the top of the battery supplying the hydrants via down pipes. Elsewhere on the ovens, the hydrants are supplied from pipes running under the bench surface. The reason for this is that the pipes within the bench in this area were damaged due to ground movement, a common occurrence here and the cheapest solution was to put in a supply running along the oven tops. Gateshead Libraries