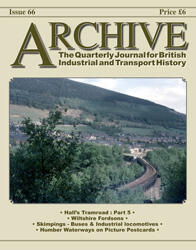 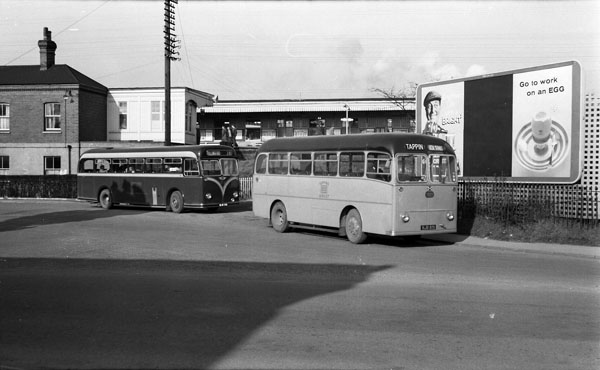 From 'An Oxfordshire Interlude' : Taken on the forecourt of Didcot railway station probably around 1960 with two local buses awaiting passengers. On the left is a City of Oxford Motor Services A.E.C. 'Reliance' on the 38 service to Wallingford. Registration number WJO 741 carried fleet number 741 and was built in 1955 with a Willowbrook body and carries Oxford's traditional livery of red with pale green and maroon detailing. Having experimented with two small batches of A.E.C. 'Regal' Mk. IV 'First generation' underfloor-engined saloons in 1952, The City of Oxford Motor Services Ltd turned to that manufacturer's 'Reliance' chassis for its subsequent deliveries. This vehicle was numerically the last in the initial batch of six (736 to 741). The 'Reliance' was conceived as a 'heavyweight' single decker chassis and remained in production, satisfying primarily the demands of the coaching market, until the A.E.C. Southall works were closed under Leyland management in 1979. On the right in the orange and black livery of Wallingford-based operators Tappins is an Albion Nimbus, NJB 819, delivered in 1956 and again with a Willowbrook body. Albion's diminutive 'Nimbus' saloon was introduced in 1954 and shared the same chassis as the underfloor-engined 'Claymore' 3 to 4 ton truck range. In bus form, the type was built in relatively small numbers, being dropped by 1964, perhaps prematurely as the subsequent success of the Bristol LH was to prove. Tappins is a long established Oxfordshire independent which is still with us today as one of the largest coach operators in Southern England; they recently joined the Heyfordian Group. Tappins were amongst the few enthusiastic independents to receive a 'Nimbus' back in 1956, one would be more likely to have encountered the breed in the Highlands of Scotland, South Wales, or down Devon and Guernsey lanes due to their narrow track and short (11ft 10in.) wheelbase. Having said that, a handful of these nippy and manoeuvrable machines even found their way into the ordinarily unadventurous municipal fleets of Halifax and Southampton Corporation. Fred Ward, courtesy John Horne, notes by John Harbidge Rose 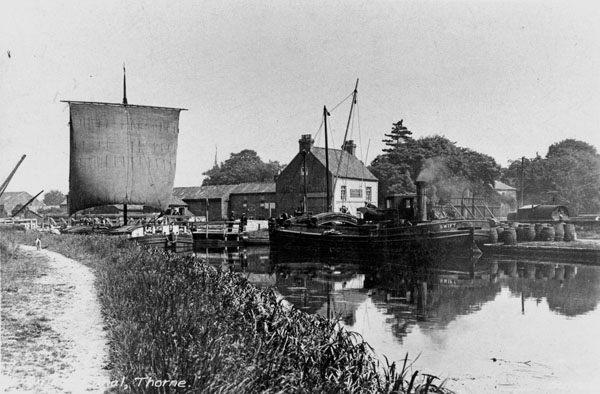 From 'Canal at Thorne': Sometimes craft were towed by steam towing barges built of steel which themselves carried a cargo. Bisby's 1894-built steam barge Swift was one of these and, based near Thorne's Canal Tavern, shown on this unused Scrivens postcard from the 1920s, it worked a regular weekly service, delivering barrels of beer to Hull for a local brewery, returning with market goods for local farmers and shopkeepers and, occasionally, towing some of Bisby's dumb craft to/ from Hull when they had business in the docks.