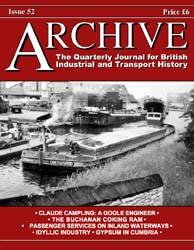 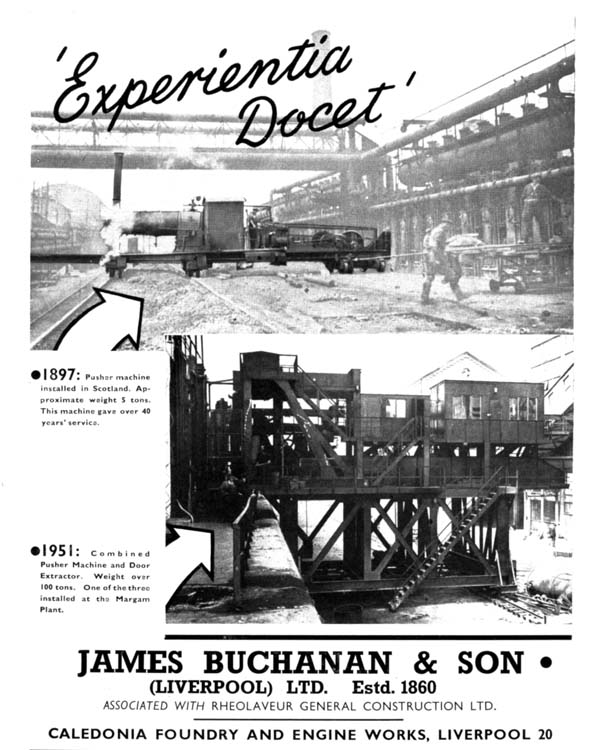 From 'The Buchanan Locomotive Boilered Coking Ram: 'In 1951 the Steel Company of Wales considerably extended their steelworks and constructed an extra ninety coke ovens at Margam near Port Talbot. This was the reason behind the publication by the Iron and Coal Trades Review of a special issue of a 'Technical Survey of the Steel Company of Wales Steelmaking' in 1952. Within this useful book, an advert was produced for James Buchanan & Son. Because of the rarity of an imaginative Buchanan advertisement (most of the others Â­ few in number Â­ were of a very simple and basic design) the item is reproduced here. Two very different rams are illustrated with the translated maxim 'experience teaches'. Pictured in the upper part of the advert was a machine constructed for a Scottish plant in 1897, with a weight of five tons and it was stated that it 'gave over forty years service'. An enlarged copy of this picture, possibly taken during the war years, is shown at the head of this article and it is similar in many respects to the general arrangement drawing reproduced overleaf. Again a cab has been added, which is smaller than that of the stamper machine and an operative (possibly female) can be seen at the driving position. Gearing, boiler, cylinders and ram head can all be viewed. The safety valve is situated in front of the cab; with the boiler feed apparatus below, on the outside of the firebox. Fortunately, at this early date, there was only one by-product coking plant in Scotland and that was the Dumbreck/Twechar works of William Baird & Co. Ltd in Stirlingshire who used fifty Semet-Solvay waste heat ovens to produce blast furnace coke. These were later increased to 150 Â­ with a throughput of 230,000 tons pa Â­ to be eventually shut down in 1941. Undoubtedly this was the location of the picture of this remarkable machine. The view was used a second time in a different advert for the Buchanan ram installed at the John Summers works at Shotton in Flintshire in the following year. By 1910 electricity was being used in many coking plants as the motive power for the large equipment. This was so much more efficient and the electric motors so powerful for their size, that steam in most cases was very swiftly superseded as the power source. Certainly no new steam powered rams were constructed for use in the U.K. after 1910 and the Dumbreck machine seems to have been very much a late (and only) survivor of this interesting device. 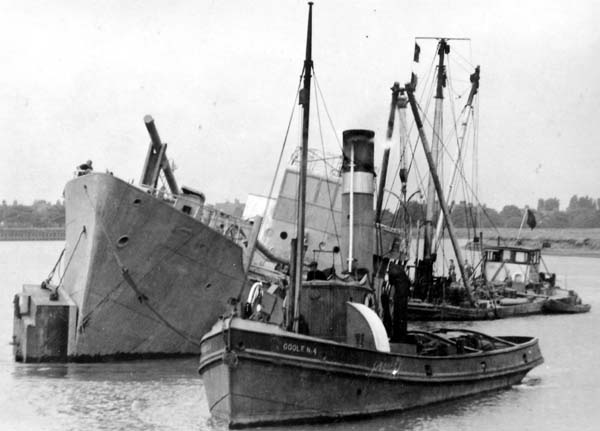 From 'Claude Campling (1912-1985)': The coaster Hartel grounded on Goole Ness in January 1951. Its Dutch owners brought a salvage team across the North Sea and this was a significant event in Claude's history because, after repairing some of the team's equipment, he was impressed by the abilities of the man in charge and learned about the techniques of salvaging and diving which stood him in good stead for the future. The recovered vessel is shown in the Ouse being escorted towards Goole docks by the tug Goole No 4 and the Dutch salvage vessel Luiken after being raised in the following July, six months after the original accident.Â Allan Lister Collection