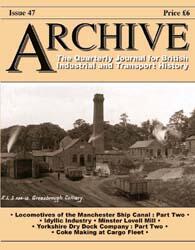 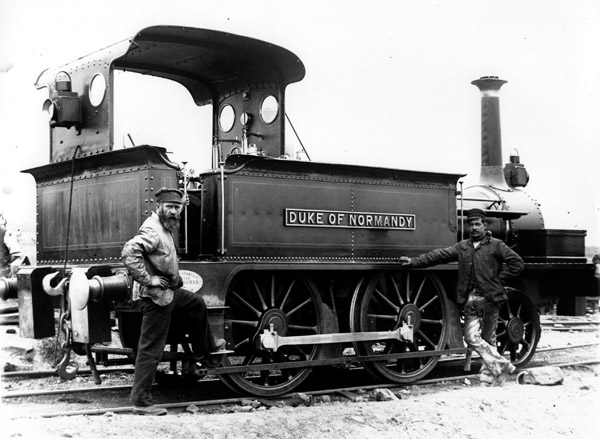 From 'Locomotives of the Manchester Ship Canal': Before the Ship Canal scheme had gained Parliamentary approval, several firms had opted to move from the Manchester area in order to escape the high transport costs imposed by the Mersey Docks & Harbour Board and the railway company Orings. One such enterprise was the major engineering firm and locomotive builders Sharp, Stewart & Company, founded in 1833, which had moved its Atlas foundry away from Manchester and re-located near the banks of the Clyde in Springburn, Glasgow. As it happened, one of the first arrivals on site at the commencement of the Ship Canal contract was one of Sharp Stewart's Manchester products, the locomotive DUKE OF NORMANDY (Maker's No. 2048), a 2-4-0T built in 1870. Photographed at Acton Grange on the 17th September 1890, it was one of two similar locomotives, which were the oldest engaged on the contract. They had been transferred after work on the Jersey Tramways and Barry Docks projects. As a speedy Omain line engine, it is said to have been used on occasions as an Oambulance to carry injured workers to the nearest medical station. 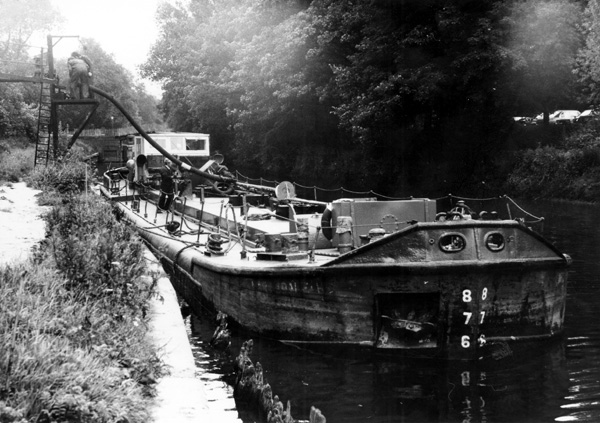 From 'The Yorkshire Dry Dock Company': The takeover of Harker craft also occurred in 1976. Their crews had been aware of their owners' intention to give up carrying for several years before it happened. Necessary maintenance work had been neglected, bodged or even ignored, resulting in considerable work having to be done by YDDC on the craft bought by Whitakers. Harkers' former 138ft x 171/2ft, 250 tonne capacity Marchdale H, built at Knottingley in 1963 and powered by a 6-cylinder 150 hp Gardner engine is shown with pipes being connected up shortly after arrival at York glassworks on the River Foss with a load of fuel oil in July 1980.