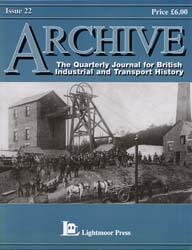 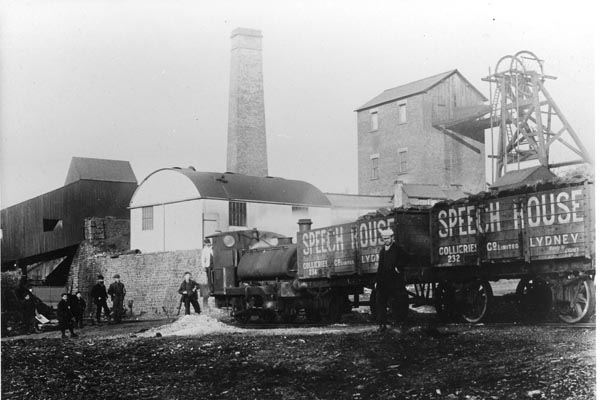 From 'Speech House Hill Colliery': A recently discovered and stunning view of the pithead with the colliery co's own locomotive. The history of this engine is very sketchy. It is believed to be a Dick & Stevenson of Airdale as it has features similar to other locomotives from that manufacturer but there are records of other locomotives credited to Speech House Hill although none can be confirmed. This would appear to be a regular standing place for the loco as witnessed by the pile of firebox ashes alongside the siding. The two wagons in Speech House livery are both built by the Gloucester Railway Carriage & Wagon Co. and are 6-plank of 10 ton capacity. The livery appears to be black with white lettering shaded red. Above the right hand wagon can be seen the headframe over the shaft which was used both for winding and pumping. The shaft was 420 feet deep. The Churchway High Delf coal was found at 393ft., with a thickness of 3ft. 3in., the Rockey was 2ft., thick at 311ft., and the Starkey 2ft. 6in., at 251ft. To the left of the view can be seen the rudimentary screens. Alan Corlett Collection 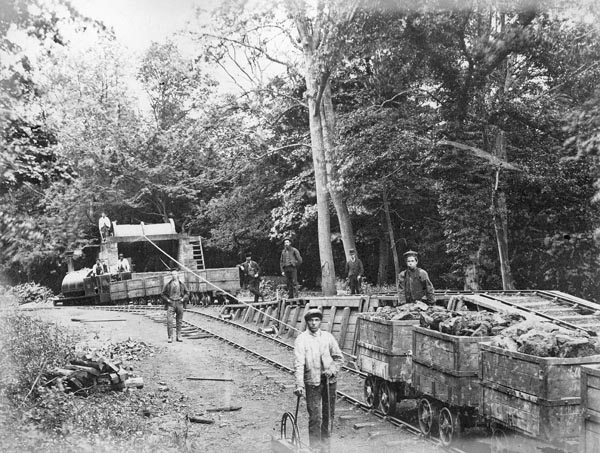 From 'The Kirkleatham Iron Stone Company': Incline Bank Top. Kirkleatham No. 1 has delivered her train of full tubs and is coupled up to a short rake of recently arrived empties. The light shining on the saddle tank prevents her name from being discerned and the rectangle on her cab side is presumed to be her builder's plate. The incline was self-acting, the weight of descending loaded tubs hauling up empties and the whole operation was controlled by the Brakesman, stood atop the winding platform. It was a brilliantly simple system; as the rope controlling the full tubs wound out OVER the left hand side of the wooden winding drum, the empties were hauled up by a second rope winding UNDER the right hand side of it â a short length can just be seen beneath the drum. The man holding a lever, centre foreground, is almost certainly controlling a simple signalling and bell system, which permitted safe operation of the three quarter mile long incline. Apart from the locomotive crew, another six workmen are on view here; it is thought the chap in the background, standing in front of a tree and holding a cane, is one of the Oxford visitors. Note braking sprags on the ground on the left and that the viewpoint has imparted a slight distorting angle on the photograph â the locomotive is actually standing on the level. Parkhouse/Pope Archive