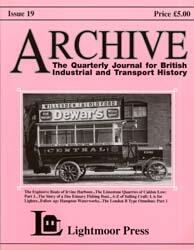 Contents: The Explosive Boats of Irvine Harbour by Alastair Weir, p. 2; The limestone Quarries of Caldon Low: Part One by Basil Jeuda, p. 17; The Story of a Dee Estuary Fishing Boat by Ina Bushell, p. 35; The A â Z of Sailing Craft: L is for Lighter by Edward Paget-Tomlinson, p. 44; Follow Up: Hampton Waterworks by John Alsop, p. 53; The London B Type Omnibus: Part One by Neil Parkhouse, p. 55 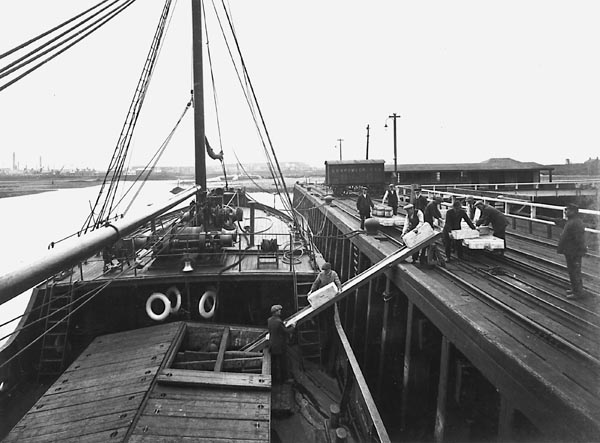 From 'The Explosive Boats of Irvine Harbour': This view shows the backloading of explosives on the Lady Dorothy. Even with the improved facilities, it was still a labout intensive business but now less prone to the weather. Great care in handling was required but the dock workers record was good and no vessel was ever lost at Garnock loading this way. The boxes most likely contain dynamite sticks, whilst the barrels on the tram wagon behind almost certainly contain gunpowder. Note the North British Railway gunpowder van beyond, standing on the wagon turntables provided. The purpose of the building behind is not known but it was probably used for storage and offices; it can be seen that, compared with the previous view, it has been extended in the interim but the building does not survive today. Gone too, are the standard gauge tracks, taken up many years ago, although the narrow gauge rails survived until very recently and the engine shed for this system still stands, just off picture to the right. Latterly, explosives were brought to the wharf by road vehicles. Note the main harbour at Irvine in the background. 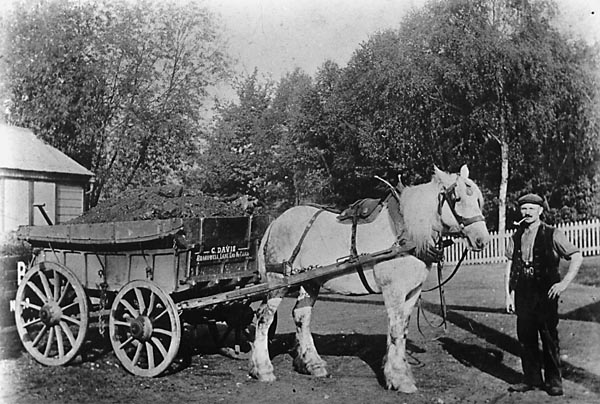 From 'Skimpings: Speech House Road Station': Here we have a four-wheeled waggon standing on the loading wharf and backed up against a wagon on the siding. The waggon belonged to G. Davis of Broadwell Lane End, Nr. Coleford and had probably brought coal from one of the smaller collieries, such as Forest Red Ash Colliery which was working on the Foundry Gale, or from New Road Level Colliery, both of which were just down the road towards Coleford. Each waggon contained about 2Â½ tons of coal and there were often complaints against the carters when they were attempting to the get the horse to back the waggon up onto a wharf when the narrow wheels tended to dig into the soft surface. Unfortunately the identity of the railway wagon being loaded cannot be determined. The wharf at Speech House Road saw a new lease of life during the Second World War when it was used for the unloading of ammunition to be stored in the open under the trees around the Speech House area. John Saunders Collection